Stranger Danger: Advice on How to Train Your Dog 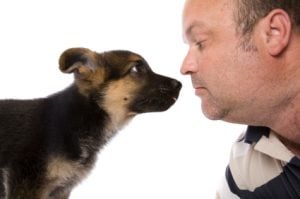 Many parks and recreation grounds have their particular group. The same group of people that wander around daily together whilst their lucky dogs run and socialize together, the dogs and people become friends and everyone wins.

Unfortunately in many parks there is also often the dangerous stranger. The regular walker who fancies himself (or herself) as the next charismatic well marketed celebrity dog trainer. Usually this individual is seen as somewhat of a nuisance; particularly to people that know the fundamentals of positive dog training. Unsolicited dog training advice is inconvenient, often incorrect and sometimes dangerous.

As new and naive dog owners, we are often pleased to receive any advice given with the aim of improving our dogs behavior. There are risks however involved with accepting and acting upon random advice. After all we wouldn’t accept advice on bringing up our children from strangers so why how to train your dog.

There are many dog training methods floating around in the average dog walking area. These range from hitting your dog with a rolled up newspaper to flicking your heel behind you to kick a poor unsuspecting dog. The kicking is a theory I have recently heard on how to train your dog to walk at heel. How the poor creature is supposed to make that connection is beyond me.

It is usual to hear the term “dominant” and “submissive” whilst out walking too. These terms are overused and often offered as an inaccurate description of whatever some poor dog has decided to do at the time of observation. Often these terms are also accompanied by a statement that an owner has to “be the boss” or “show the dog who is in charge”.

Show him whose boss!

Dominance is an unproven theory on how to train your dog, often and unfortunately this theory can also be quite unkind to dogs. Unsurprising for it is dog training based on a belief that the dog is always looking out for a way to take over the household.

Based on studies on behavior within wolf packs, the dominance theory advocates that every unhelpful dog behavior means that he is trying to occupy the position of leader within the “pack”. So when your dog pulls on the leash he is trying to physically lead, when he stares at your food he is not respecting your leadership, and when he jumps up he is trying to get close to your face to establish dominance.

Theories that aim to show you how to train your dog by dominance range from pretending to eat from the dogs bowl to lying in the dog bed.

Many spin off dog training techniques have appeared loosely based on the theory of dominance. Leadership and being the boss are two of them. Unfortunately for the poor dog’s any advice on establishing dominance often involves physical and/or psychological harm. The alpha roll being one of them, the owner is encouraged to roll a dog on its back to establish dominance. So a confused dog, confronted and rolled over by a misinformed owner is the result.

The truth behind this theory is that dogs do not want to rule. They do not look for weakness in their human being in order to attempt world domination. Training by trying to keep a dominant role is ridiculous. The dog will not understand what you are doing. You would be speaking to your dog in a language even further removed that the species distance between you and him already. If anyone offers you advice on how to train your dog involving any kind of dominance theory or showing him his place, please for your own and your dog’s sake walk away.

The only way to understand your dog is to accept that he learns by reinforcement from you, the people around you and his environment. If you reward helpful behavior then you are teaching him to repeat it. Similarly if you reward unhelpful behavior he will also repeat it, because he has learned that it is beneficial to him. Put some time into learning how to train your dog with kindness and positive reinforcement. Work out which behavior you may be keeping active by an inadvertent reward such as attention. Work with your dog, not against him with understanding and a mutual respect.