How to Deal with an Aggressive Dog 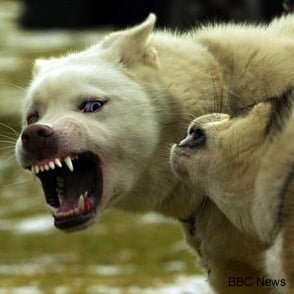 When you talk to another person in day-to-day life, you pick up on hundreds of body language cues without even realizing it. But did you know that your dog gives off the same cues regarding their temperament, mood, and behavior by using their body language?

Some of the behavioral cues listed above are obvious, like snarling or growling. Other behavioral cues from an aggressive dog are more subtle, like narrow eyes and a rigid body position.

There’s a dramatic difference between defensive aggression and an aggressive attack. If a dog feels like they’re in danger, they will exhibit a fight-or-flight response, similar to humans. An example would be if a dog is on a leash and becomes frightened by another dog. His natural instinct will be to flee, but he may be forced to go on defensive attack if he is held captive on a leash.

Many people believe that a dog this situation is an aggressive dog, but this dog is actually fearful. This behavior is what is known as defensive aggression.

Here are several behavioral cues to make a distinction:

How to Prevent a Dog Bite

Whether a dog is defensive or aggressive, he may be prone to bite if he feels threatened or attacked. Understanding both of the behavioral cues listed above will make it easier to manage a situation if a dog is snarling and showing signs that it may bite.

According to the Humane Society, the worst thing that you can do when faced with a defensive or aggressive dog is to turn your back and ran away.1

This again plays into the natural instinct of a dog to chase you, catch you, and bite you. Another fairly obvious tip to prevent a dog bite is to never disturb a dog when it is eating, sleeping, chewing on a toy, or caring for puppies.

If a dog has shown aggressive behavioral cues, you can use the following tips to prevent an attack:

If your dog is showing signs of aggression, the best thing that you can do to prevent him from biting or attacking is to socialize him. Find a trainer that works well with aggressive dogs in order to slowly condition your dog to accept new dogs and strangers.

Additionally, if your dog has not been spayed or neutered, this could greatly reduce aggression and make it easier to socialize your dog in new situations. A routine procedure like neutering will make your dog less likely to fight with other dogs and bite strangers.

Make no mistake – aggression is a serious issue that needs to be addressed immediately. Avoiding or ignoring the behavioral signs listed above will only make the problem worse and could endanger those around you.