I'm curious as to whether to successfully crate train a dog, if that dog needs to sleep locked in it's crate most nights. Sooooooo, here goes. Where does your crate trained dog sleep?

I guess I'm not sure what you mean by crate trained. Veronica has a crate and 99% of the time the door remains open and she accesses it independently when she wants to. She sleeps in our bed at night. But on the occasion when we have to leave her and lock her in her crate she's perfectly comfortable.

Yeah i'd class that as crate trained. The reason I ask is that I don't want to lock Evie into a crate at night. I like her being able to sleep with us if she wants to, but I also feel like i really NEED to get her crate trained for agility as she's very over the top when watching the other dogs..

Piper is crate trained... well she has to be crated and goes in when she you have a treat, anyway Piper sleeps in my bed. She will Not go into the crate unless she has too, she HATES the crate. Doesn't seem to matter what I do the crate is her enemy.

Well, I'm going to have to have a bit of a brag now. I just got home from crate shopping. I just bought her a cheap synthetic one in case she decides she won't have anything to do with it... but so far so good. This is her literally 5 minutes after me setting the crate up. I think he knowing the 'get in the suitcase' trick helped a LOT lol. Pity I know her love for the crate won't stick around once she realises it's somewhere she gets confined in. 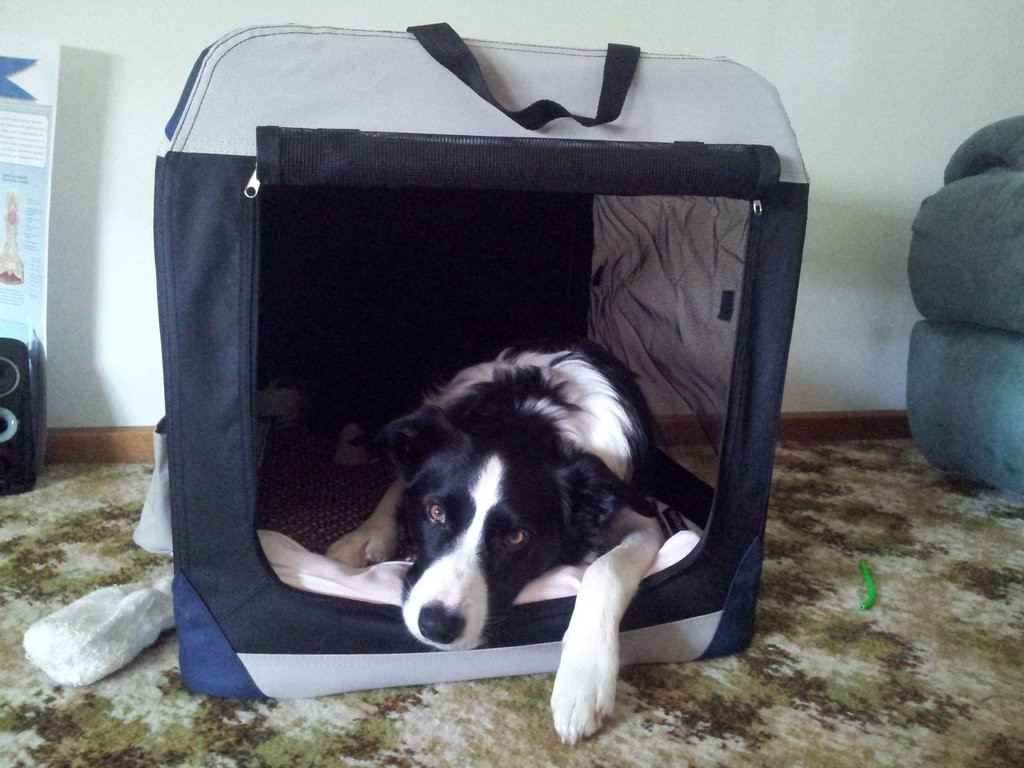 All three of our dogs sleep in crates at night.

Holly and Skye usually put themselves to bed before they are actually told to go so that they just have to be sent outside for a last toilet (unless it's really late then we don't bother sending them out and just shut the door) when they come back in they automatically go to their crates.
Lewis' crate is upstairs, if we put him in a crate downstairs then after a couple of hours he starts to whine, if he's upstairs (where all the bedrooms are) he sleeps through the night.
Our dogs are not allowed upstairs (we have a baby gate) so Lewis is carried up at night and down in the morning, so even if Holly and Skye didn't sleep in crates they couldn't go into anyones bedroom. The two reasons for not letting them upstairs is we don't want them in bedrooms, but mainly for safety reasons, I have heard of dogs dying from injuries after falling down stairs (ours are wooden so relatively slippery) and I don't think its good for dogs to go up and down stairs a lot. No playing chase on the stairs.

I think Holly and Skye would sleep in their crates even if the doors were open but there are a few reasons we shut them in.
1) the cats (our dogs sometimes chase one of them, so it's nice to ensure the cat is safe overnight), also, the cats sometimes bring in rats/mice, it's better to not let the dogs get involved in that.
2) we have a cat/dog door so we don't really want the dogs going outside during the night incase they start to bark/find a hedgehog etc.
3) Holly has taken a long time to be trustworthy, she will be really good and then randomly do something naughty (nothing too bad though, just enough to keep everyone on their toes) which we would rather prevent overnight (eg, she chewed up a clothes peg yesterday - she hasn't done that for months, every so often she will decide to climb onto the kitchen table or knock over the recycling bin, but most of the time she doesn't).

So they are all crated overnight. When we have competitions Holly and Lewis have crates in the car. Skye always travels in a small crate (because she is so small). If no one is going to be home for more than 10mins they go in their crates (Lewis has a downstairs crate for during the day) - that's not very often though. They are all very comfortable being in crates.

But in saying all that, I don't think a dog has to sleep in a crate to be crate trained and to be comfortable in a crate. You could shut Evie in the crate once in a while if you want to make sure she is ok with it though.

Veronica LOVES her crate, always has. She is in and out of it all day. It is her safe spot and the first place she runs to when she is scared when thunder and lightening or fireworks strike (although she is also getting awfully attached to her dog bed under the desk in the office).

However we did take a crate with us when we did agility and it didn't really help her reactiveness all that much (but she is VERY dog reactive and reactive in general). There was still allot of whining/barking and fussing in the crate when there was allot of activity and she would never settle down enough to just rest or have a chew or anything.

So I guess what I'm saying is crate trained at home doesn't necessarily = quiet and comfortable in the crate in other environments....you may have to work on that also.

When he was younger, I used the crate when I was gone during the day, but allowed him to sleep on his bed next to my bed at night. This worked out well for us, and after about a year I stopped using the crate during the day.

Some dogs love their crates and choose to sleep in them even when given other options. Looks like Evie is enjoying hers!

Ripley is crate trained, particularly for longer journeys. We started her in the crate partly to give her a safe place when we first had her and partly because she was 'destructive' as an 18 month old rescue. We spent an age teaching her to love her crate and she now does but she still prefers, now, 'guarding' the front door at night in her dog bed. She chooses to go in or out of her crate other than when travelling in the car on a long journey when she is shut in in the boot of the car. We always put a throw over the crate and I thinks she sees it as a den. She is good in the car but for a longer journey I feel she is safer within the fixed crate. It took longer for her to see the crate as safe when travelling than as a den in the house but she knows now that if she is in her crate she needs to settle down for the journey rather than it being a quick travelling experience to a walk. When she is in a strange place such as a dog-friendly hotel or my Mum and Dad's place (they live about 180 miles away) she is better knowing she is safe in her crate at night than in her bed. It is still a safe place but now in our house she is not shut in at night as she is now trusted not to destroy something

but can now have the reward of sleeping in her dog bed in front of the front door 'guarding' the house... This has taken about 4 years of training and patience to get her to still love her crate without seeing being shut in it as a negative thing whilst still seeing the alternative of sleeping at the front door as a good thing too.

Chloe is crate trained, mostly just because it makes things easier when we are going to trials. She is fine in her crate, and will gladly run in it. She doesn't sleep in it at night though, she sleeps in my bed, or her bed.

My two are crate trained and stay in there while I am at work. I like knowing that they are safe and can't ingest anything dangerous for them. That being said, they do not sleep in their crates at night. Shadow sleeps in the den either on the couch or leather chair and Skye sleeps in bed with me

My two are crate trained. Seamus *loves* his crate! Teaghan, at agility trials, love going into her pop up tent, but at home not so much does she love her crate.
In fact, at trials, the only problem I have with Teaghan going into her crate is her diving into her tent before I have a chance to remove her leash!

At night, I have both of them closed in my bedroom; I used to let them sleep out in the living room, but a month or two ago, Seamus decided he needed to get me up in the middle of the night to go out. When they're in my bedroom, Teaghan sleeps on the bed and Seamus in his crate with the door open. (he almost always is in his crate all night, just cause that's what he likes.)

I don't use an actual crate with the dogs, I've started using the car to play crate games with Gus, but it'd be hard to fit the car in the house for him to sleep there at night...

Frida sleep in her crate at night with the door open. I do not know if that makes her crate trained but she likes her crate better than her huge bed. Whenever she want's to be left alone , she goes in her crate. I never liked to have my dog sleep in my bed even if I don't have anything against it. But having a big black lab that shed and likes to climb on me with her big face leaning right next mine isn't my idea of a good night sleep !

dog nerd said:
But having a big black lab that shed and likes to climb on me with her big face leaning right next mine isn't my idea of a good night sleep !

It depends on the how big is the dog.. I also have seen people that had bought dog beds.. According to me the crates are mostly for puppies!

I crate trained both of my dogs when they were puppies, and when they reached the age where they could be trusted roaming the house all day unsupervised without risk, I would leave their crate doors opened so they could come and go as they please. Then I moved, and since both dogs where rarely using their crates I put the crates away. But I have helped friends/family/clients crate train multiple dogs and they all preferred to keep their dogs in the crates at night with the doors closed.
You must log in or register to reply here.
Share:
Facebook Twitter Google+ Reddit Pinterest Tumblr WhatsApp Email Link
Top