So today Evie and I went to our first trial!!

SOOOOOOOO proud of my little girl. She was so well behaved (for the most part) and was listening to me so well. A couple of minor errors stopped us getting clear rounds in the morning, but in the afternoon Evie and I took first place in the Novice Jumping! I've got all 4 of our rounds on video, I might post the others tomorrow, but here is her winning jumping round

Please excuse the video, the person behind it got a little distracted watching me and forgot to follow Evie with it lol.

So proud. Can't wait til next weekend.

That looked brilliant! Well done to both of you! Evie looked very confident, which is great considering what you have said about her confidence in public. I would be incredibly proud too!!!!

Ripleygirl said:
That looked brilliant! Well done to both of you! Evie looked very confident, which is great considering what you have said about her confidence in public. I would be incredibly proud too!!!!

Yeah, she is confident at agility... because she absolutely LOVES it

Andddddd a picture of us with our ribbon 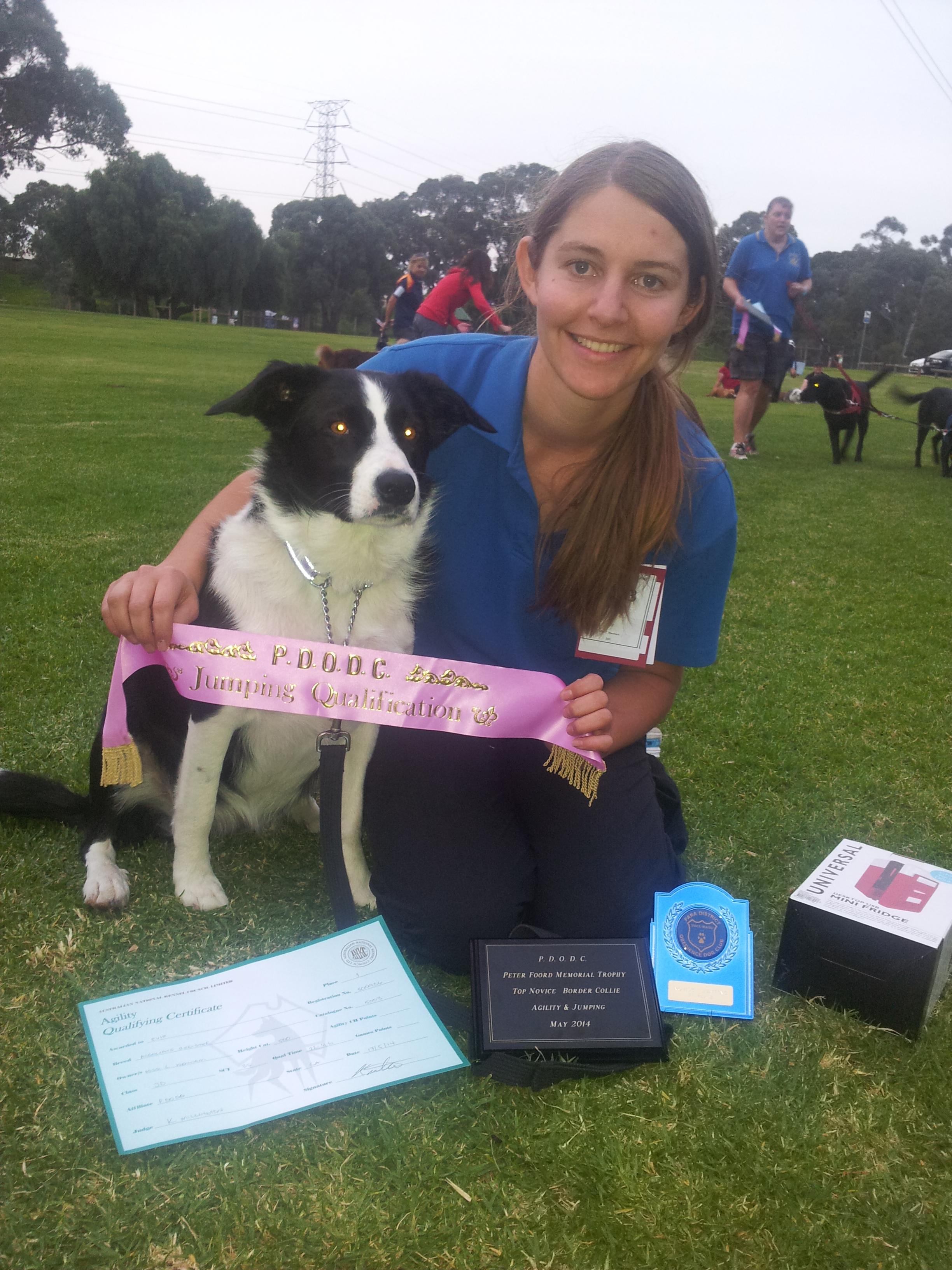 Well done to you and Evie, you've both done amazingly.

This was our first round (agility this time instead of jumping). We were both super nervous, so I'm very proud of her, even if we made a couple of mistakes and even if she did momentarily forget how to weave..

And now I'll stop bombarding the forum with Evie's agility stuff lol... well at least until next weekend when we do it all again!~

I find it interesting how your agility is different to what we do here. I guess Australian agility is a bit more like American agility with the pause table and starting at "Novice".
In NZ there is no pause table (I wish there was though) and agility starts with "Starters" which does not have contact equipment (just jumps, tire, weaves, tunnels, collapsed tunnel, long jump) and then once you win out of "Starters" (I think you have to win 2 or 3 times) you move up to "Novice" which adds in contact equipment (dog walk and A-frame). Then Intermediate, then Seniors.
Looks like Jumpers is pretty similar though, except we do not have winners of a specific breed that I have seen (eg, fastest Border Collie) and trophies arn't usually given out; just ribbons and certificates (for clear rounds).
Me and Holly have a Ribbon trial this weekend, hopefully we will do as well as you and Evie!

They don't usually have breed specific awards, it was just that the club who held the competition had it as a memorial trophy for one of their past members who must have been a bit of a border collie nut

I think here (could be wrong as I'm still learning) that once Evie gets 3 (or was it 5?) 'blue cards' (which are presented for any clear round in the allocated time) that she then has to move up into the next difficulty level for either Jumping or Agility. So she doesn't even have to win it... just has to go clear :/

But there are only three levels; Novice, Excellent & Masters

Oh and I'm pretty sure trophies are only given out to Novice competitors, and ribbons are only handed out on request. It's the blue cards that everyone wants lol

Evie said:
And now I'll stop bombarding the forum with Evie's agility stuff lol... well at least until next weekend when we do it all again!~
Click to expand...

Bombard as much as you like, you've done really well with Evie and you are right to be proud of her

Bombard away, you've every right to be so proud of her. Terrific accomplishment for your very first Competition. She's a star in the making! Only two wee mistakes and a clear round in the jumping! YEAH

And an update from our last weekend (second competition)

Evie started the day with Jumping, she did everything I asked her too, but I made a mistake so we didn't go clear. Then we did an Open Agility round. For those of you who don't know what Open is, it's an agility course (which is set one level higher in difficulty than what Evie and I currently compete at) that has an 'exclusion zone' where the handler can't cross a line on the ground but the dog still needs to complete those obstacles in order. So it basically is making you do distance work with your dog.

Evie was brilliant. For some reason she still refused to weave, and I think she knocked one bar, but the important part was that she did the exclusion zone PERFECTLY!!!! which included a broad jump, a scramble, a tunnel and several other pole jumps. So proud that she got the contacts on the scramble, and listened to me telling her to go out to the jumps and tunnel. A little sad that I didn't get our round on video though

In the afternoon we did Jumping and Agility. Unfortunately, we didn't get any clear rounds for the day but I'm SOOOOOOO proud of her, and her last agility round was just amazing! My trainer and I both think it's as good as a clear round..


Evie Agility PM - it's very dark because the sun was setting and the video was facing the sun.. If you watch it in a dark room you can see it better

Hmm, it seems the videos both decreased significantly in quality when i uploaded them... sorry.

Congratulations to you both!

Fabulous work and you must be so proud of Evie.

I could see Evie quite well, her white showed up beautifully, but LOL you kinda disappeared into the glooming!

You too look so great together! Well done again. The light did make it a little hard in the second one to properly see you both! But great work none the less!

Just saw this. Evie is doing fantastic! You guys work so well together!

If anyone's bored, I have a video with last weekend's trials.

She was brilliant all weekend, but has taken to knocking one bar each round... it's the only thing she did wrong.

We also ran our first Gamblers round, and not only passed, but we won it by 6 points!! And Evie got her first agility pass and placed 2nd with it. So all round, it was a great weekend

Unfortunately my Gamblers round didn't get video'd

! but most of the other others did! Her 'clear' round is at 3.49 (it's the last round of the video) and although it definitely wasn't one of our nicest rounds, it was still clear and we still got a pass for it. If it wasn't for all the fumbling about on my part we probably could have won it lol. Best thing about it all, is that the more agility we do, the more confident Evie is and the faster she's becoming!! (and the faster I'm having to become too lol) 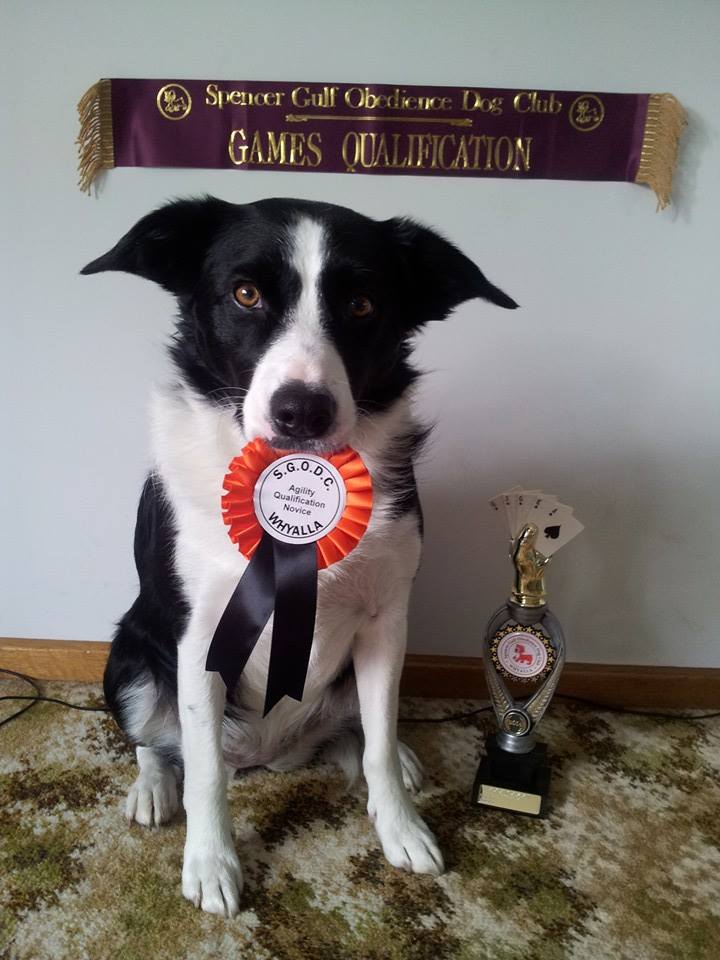