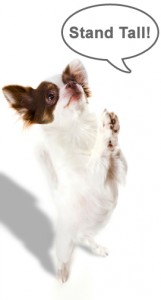 In reality whatever we train our dogs to do can be called anything at all. We can ask a dog to sit by using the word “egg” if we want to, as long as we have shown the dog what the word means. Generally though the commands we teach to our dogs are far more sensible than “egg”

Flyball and agility training is often based around the dog training commands;

Working dogs are often taught to respond to the generic obedience commands. Role dependent commands are also introduced; some of them are shown here;

Dog training commands vary, depending on the training establishment, the particular dog and the role employed for. Some of the commands used when teaching our dogs tricks are great fun;

Trick commands are great fun and can be used when reinforcing a broad range of impressive behaviors. You can even teach your dog to respond to dog training commands uniquely in a completely different language. You dog will relate to the tone and pitch of your voice rather than the word itself.